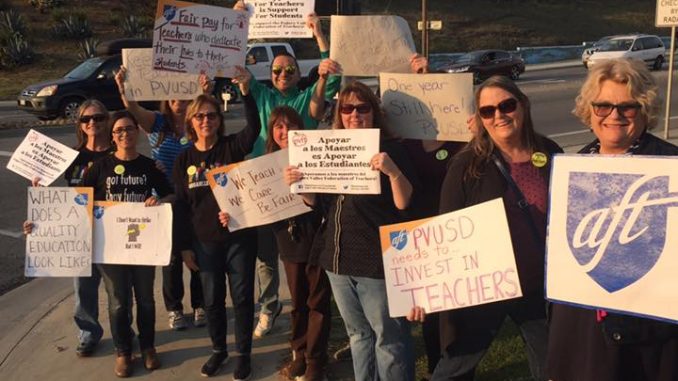 PVFT resolves to test our solidarity!

PVFT negotiators met with PVUSD today and signed a Tentative Agreement on Article 3: Rights and Responsibilities, agreeing on and closing up all outstanding contract language for 2016-2017. We received an updated proposal from the District on Article 7: Wages and Related Matters. Although the District’s most current proposal did move to better compensate our Early Childhood  and Adult Education teachers, it DID NOT include any on salary schedule increases for 2016-2017, but rather stuck with their previous one-time bonuses.

A full year ago, on December 7, 2016, we started negotiating the 2016-2017 school year with a salary proposal that would improve all member salaries on the schedule based around a stated goal: a starting salary for a first year, fully credentialed teacher of $50,000 per year. We have shifted our ask during this long negotiations process in a show of good faith; however we cannot say that we are negotiating the stated priorities of our nearly 1200 certificated members if we accept anything less than an on schedule increase. With this said, we believe we have come to the end of the road with regular negotiations.

Today at 2:35 pm we declared impasse with the District.

Where does that leave us now?  We will submit paperwork to the Public Employee Relations Board (PERB) to have our situation reviewed to see if we meet the criteria for mediation. We are hopeful that we can come to an agreement through this process.

How can you make a direct impact in these efforts?  Please attend the actions scheduled for this week of action, starting Monday, December 11th at 3:15 in Aptos and in Watsonville.